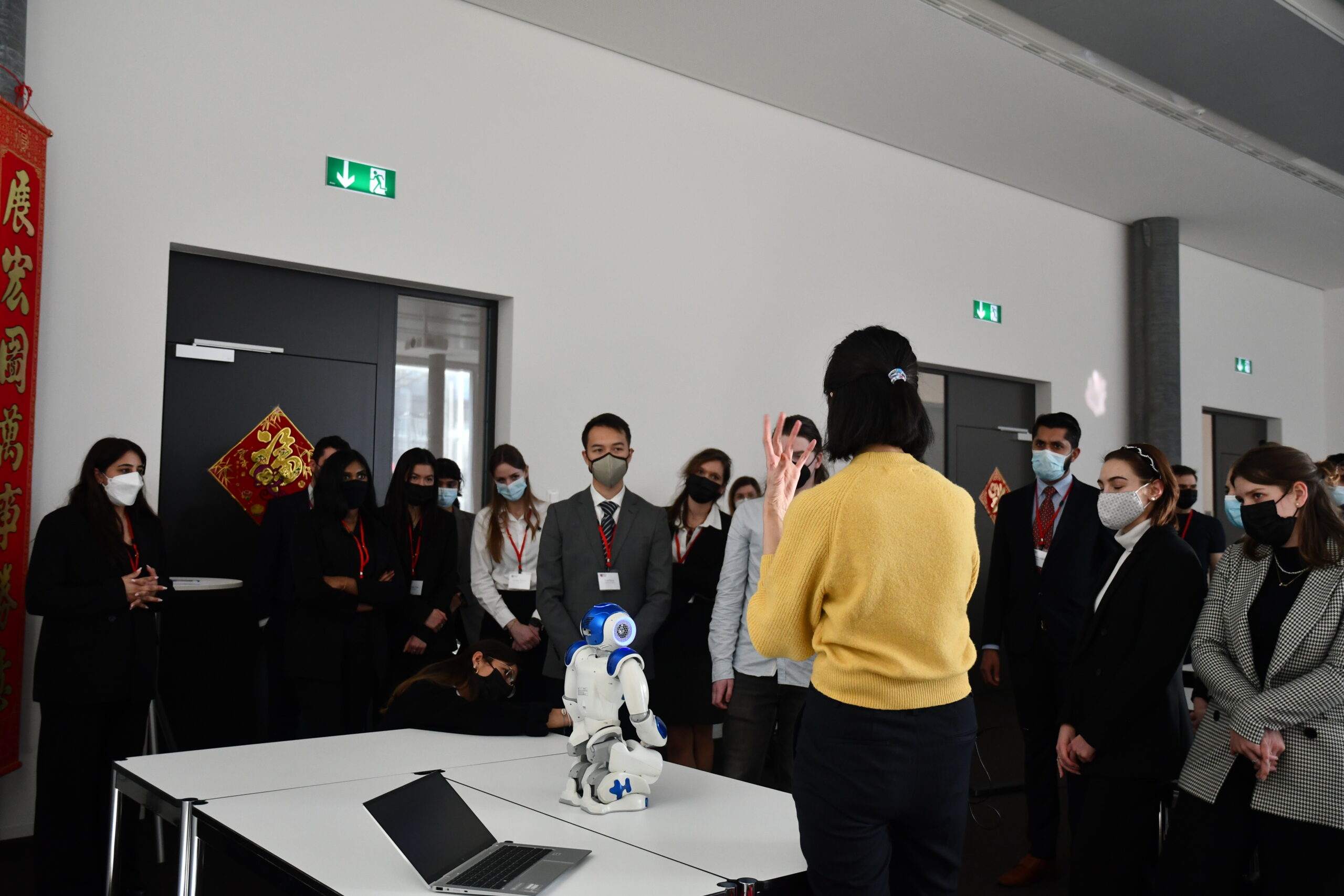 Ms Vivienne Jia Zhong is currently a Doctoral Candidate in Computer Science at the Otto-von Guericke University in Magdeburg, Germany. She holds a master’s degree from the FHNW in Business Information System and works as a Research Associate for the FHNW School of Business. Her interest and focus include social robotics and human-robot interaction in various research projects. 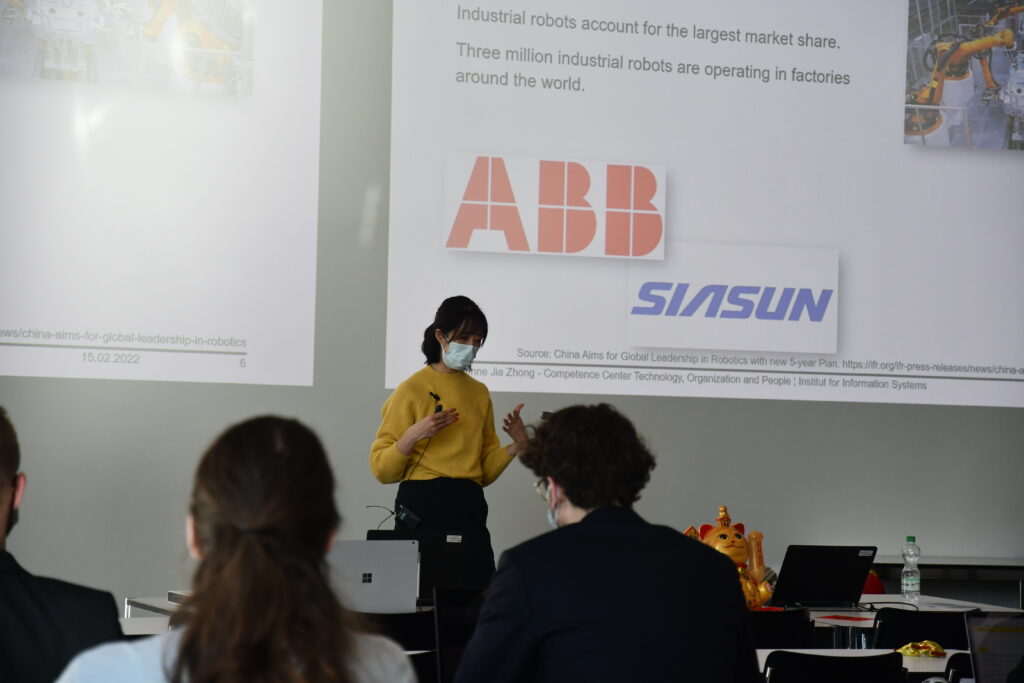 She started by explaining that there are multiple definitions of what Robots are and how they can be distinguished from each other. According to the International Organisation for Standardisation (ISO) robots are defined as an “Actuated mechanism programmable in two or more axes with a degree of autonomy, moving within its environment, to perform intended tasks.” (ISO 8373:2012). Robots possess autonomy meaning they are capable to perform processes and operations by themselves with no interventions by humans. Additionally, they are physically embodied, to move and act in the real world. In China the word robot was first introduced around the late 60s and early 70s (Wang and Ma, 2017). Robots are translated to Jī Qì Rén (机器人), which literally translates to Machine Human.

A Social Robot is described as a robot that is physically embodied with a defined degree of autonomy and a defined standard of cognitive functions. Additionally, distinctive to these types of robots, social robots can engage with humans in social interactions in a fluent way. Their cognitive functions allow them to create perceptions of their surroundings, have memory, speech and decision-making skills.

She also mentioned that factories around the world are currently using three million industry robots. They make up the largest market share of robots. In recent times China has been the largest adopter of industry robots. As of 2020 they used 62.1% industrial robots, while service robots make up to 28.9% and the remaining specialised robots account to 8.9%. There even is a restaurant named Hema in Shanghai, where every dish is prepared and cooked by fully automated robots. The usage of service robots has been increasing as well. They are designed to assist humans or equipment, not including industrial automation applications. There are different kinds of service robots. Professional service robots are used for commercial purposes, where they oblige skilled professional operators for their usage. Personal or consumer robots are used for different purposes than commercials. Laypersons are able to use these robots. It was identified that there is a general need for social robots. Social robots are considered as a new generation of robots, who operate autonomously. They have installations of social intelligence and can interact in a natural and fluent way with human users. 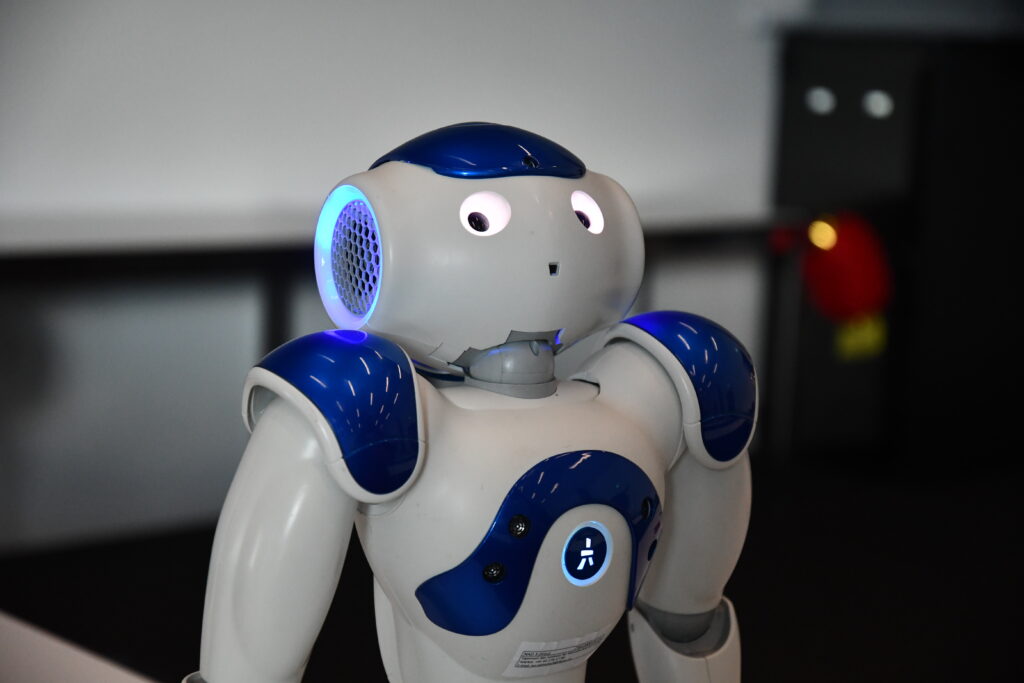 Ms Vivienne Jia Zhong further discussed if it is necessary for robots to be humanlike in the first place. Humans generally want to humanize technology. The reason being, is that robots are more favoured than non-humanoid robots, thus there is a larger likeliness for them to be used. They also spread more positive emotions and seem more trustable, so the adoption of intentions increases. When defining the familiarity and likeness humans have of robots, the term uncanny valley is relevant. The uncanny valley is defined as an imagined relationship of an object, that is humanlike and the emotions and feelings the human has towards the object. The empathy for the humanlike object can swap into the direction of strangeness and eeriness, as a lifelike appearance can be unsuccessful.

Social robots are used in different kind of life situations, as for instance in a nursing home in China. The robot there reminds the residents to take their medications, monitors the patients’ vital signs, does small talk, sings, and dances with them. Social robots therefore can assist in the service in healthcare sector. Even though the overall acceptance is still somewhat low, it has been increasing over time. In this context Ms Vivienne Jia Zhong also mentioned social robots in relation to their acceptance from a cultural aspect. She reviewed differences between Switzerland and China using the Hofstede’s Cultural Dimensions. Generally, Individualism is much more higher in Switzerland than it is in China. This might be a reason why robots are more accepted in China, as people in China tend to want more social contact and interactions. In Switzerland people are higher in Uncertainty Avoidance, meaning they are less willing to have uncertain outcomes of their work. This can reason why people in China generally feel more comfortable with the usage of robots. There is a value-sensitive design, which attempts to use a strategy of designing technologies, which attempts to echo human values. Values are defined as principles and assumptions regarding to what is significant and desirable in life to certain groups. She also argued why humans should consider the usage of social robots in the first place. As technology derives from human imagination, it can be viewed as a reflection of the designer. The usage of technology shapes human experiences, as the way people and societies live are influenced.

Ms Vivienne Jia Zhong additionally introduced us to a social robot called NAO. NAO has various skills. It is equipped with Artificial Intelligence, such as natural language processing, computer vision, navigation, object manipulation and decision-making skills. NAO has various sensors; its cameras are located in its mouth and forehead. It also has touch sensors on its head, its hands and its feet. Next to these sensors NAO also has microphones, sonar sensors and inertial units for his movements. You can see some pictures of NAO and how the delegation and project team were able to engage with him. 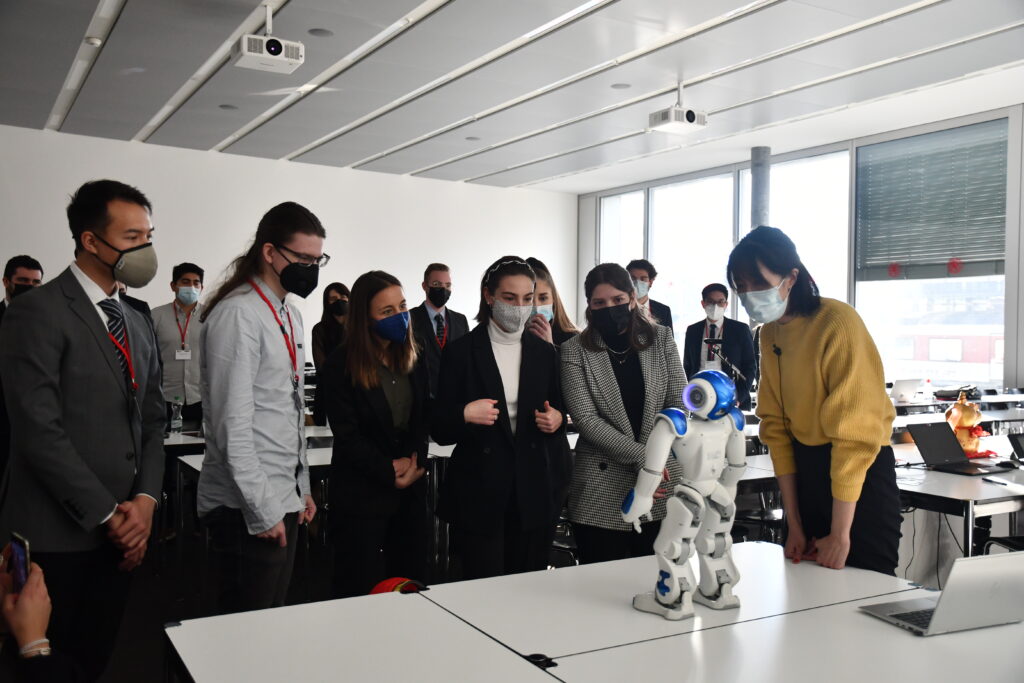 Announcement of PR and Communications Team 2016