After enjoying Chinese culture in the capital of China, we packed our luggage and made our way to the Lanzhou. Lanzhou is the capital and largest city of Gansu Province in Northwest China. It is a culturally-diverse silk road town of 3 million people at the crossroads of the orient, Tibet, central Asia and Mongolia. It is a key regional transportation hub, allowing areas further west to maintain railroad connections to the eastern half of the country. 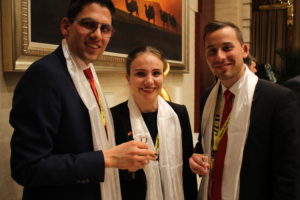 We arrived at the airport in Beijing on time but soon we found out that our flight was delayed due to the arrival of the president of Brunei. Therefore, we had to wait two hours in the plane before taking off. Originally, there was a museum visit in Lanzhou planned for the afternoon, which we eventually needed to cancel since we were arriving to our next station later than planned.

Overall, the temperature in Lanzhou was colder than in Beijing, averaging 8 degrees Celsius. The city of Lanzhou is surrounded by mountains and desert. At our arrival, the weather was very windy, foggy and dry. 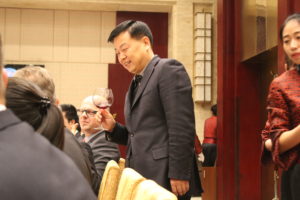 As we arrived in Lanzhou we had only about 15 minutes time, to have a short break and prepare ourselves for the dinner with the Lanzhou officials. When we entered the room, we were highly impressed by the beautiful set up of the room. Everything was planned for us, from the ten-course dinner to singers performing traditional Tibetan songs and a personal chef preparing fresh noodles for traditional Gansu noodle soup. 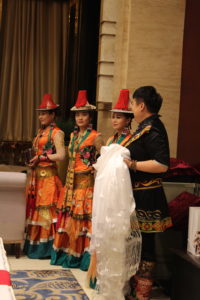 Lanzhou – Once in a Life Time Experience